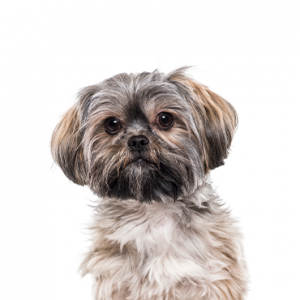 The Teddy Bear is a toy dog. It is not a breed per se but a collection of dogs that fit a certain bill of description. Teddy Bear dogs are known for their endearing faces and their wide enormous eyes. They have a soft teddy-bear coat. Their coats have a mix of colors that sit well with the eyes. They are the inspiration for the famous teddy bear stuffed animals. They are known as Zuchon or Tzu Frise. They are modern dogs with their journey beginning only at the turn of the 21st century. Petland is honored to offer the highest quality Teddy Bear puppies who will be an instant fit on your lap and in your family. Discover more about our Teddy Bear puppies for sale below!

The Teddy Bear dog, also known as a Zuchon, is crossbred from Shih Tzu and Bichon Frise parents. A combination of caring, loving, gentle, and quick-witted, this breed is a very well-liked dog. Teddy Bears are a relatively new breed of dog that got its start in the 1990s in the United States. To better understand this breed, you should first understand the origin of its parents. The Shih Tzu is of Chinese origin and was bred for decadent Chinese emperors. This breed is known for its loyal personality and ability to form a strong bond with his family. Due to this they make terrific family pets. The Teddy Bear was registered by the American Kennel Club in 1969 and has been a favorite toy breed of Americans for decades. The Bichon Frise originated on the Canary Islands. They became popular with European royalty sometime in the 13th century. While the French Revolution was taking place, many of these dogs found themselves living homeless on the street. Thanks to their unique trainability and approachable disposition, they quickly gained popularity with street performers who used them to entertain citizen onlookers.

The Teddy Bear breed has a very warm, gentle, affectionate, and outgoing personality. These loving pups received the best qualities of their parents. They have also grown in popularity throughout the world because they do very well with children in the home as well as other pets. This breed is known to form a strong connection with its family in very little time. Their easy-going, trusting attitude and non-aggressive demeanor are why they are cherished by so many people.

Teddy bear dogs come in several shapes and sizes. They have long, flowing, soft fur that is either ordinarily silky or curly to the touch. Their coats come in a range of beautiful colors such as gray, black, white, tan, and cream. Daily coat brushing is a great way to keep his coat looking and feeling its best. A weekly or bi-weekly bath will keep this dog looking sharp. Never forget to keep nail clipping and teeth cleaning a part of his routine.

Teddy Bear pups do best being fed three times a day for the first six months of their life. This early stage in their life is essential for both physical growth and mental development. Proper nutrition is also a crucial part of your puppy’s health, and top-quality food is highly recommended. Making sure that their teeth are properly brushed a minimum of three times each week is important. Keeping up with nail clipping should also be remembered.

Feeding them twice a day should do.

No, they are considered a non-shedding breed.

No, they’re not known as an aggressive breed.

As mentioned earlier, Teddy Bear dogs are loyal to their families. Once they get used to you, it would be hard to get them to stay away from you. They are good with children and will love all members of the family.

They are moderately priced. Please contact us for more info.

They grow to reach a height of about 12 inches.