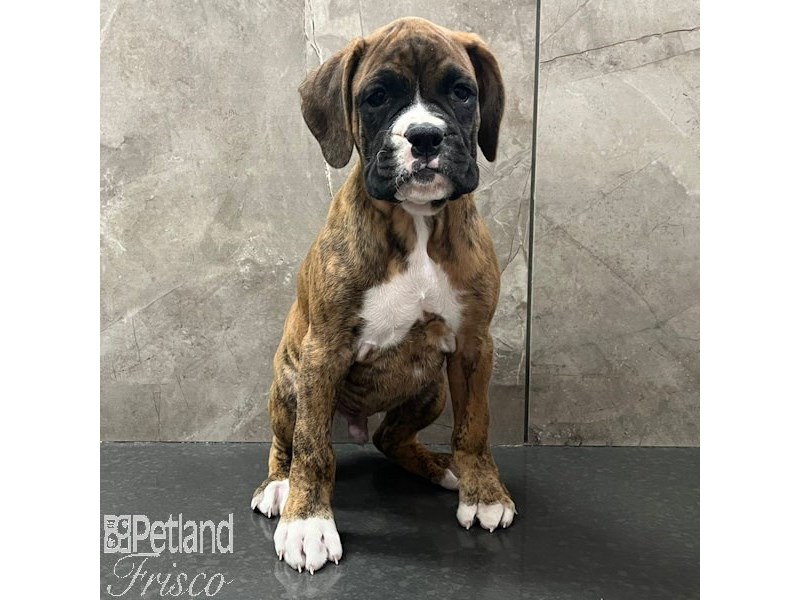 Petland Has the Best Warranties in the Industry

Want more information on this Boxer? Please fill out our Pet Inquiry form below.

If you have a liking for a fearless, energetic yet devoted pet then the boxer breed of dogs should form your list of preferred choices. As the 9th most recognized and popular dog breed in the world, whether the brindle fur colored, white or fawn, a boxer is a delight to look at and a fabulous companion around. Well, before you get on to including it on your list, let’s explore a few of its attributes. Discover more about our Boxer puppies for sale below!

From ancient Germany precisely around the 19th century had the now extinct mastiff breed Bullenbeisser and bulldogs brought in from England. At the time of their arrival, they served as hunting dogs for bears, deer, and other ferocious beasts, it would capture the prey with the help of its awesome teeth and detain it until the hunter arrives.

Sometime later these dogs were crossbred to produce what we have today as the resilient “Boxer” and in 1894, some Germans began to test its popularity in dog shows which gave place for the first boxer club (the Deutscher) in 1896. And in 1904 the first boxer standard club was launched with a comprehensive document that is still in use today.

Shortly after, the breed made its way into other European countries and got into the U.S in the late 19th century with the American Kennel Club taking registration of its first boxer around 1904.

During the first world war, boxers played the role of a military dog as a pack-carrier, a guard dog, and an attack dog, later they were taken home by the soldiers and got introduced into the domestic world as a show dog, best companion, and a reliable guard.

One with so much life, energetic, curious, attentive, active, smart, sociable and incredible fun with children is the boxer, they are also known to be very patient and highly protective of their family members making them the love and desire of many homes.

As active dogs, they need a lot of exercise to keep them mentally fit, apparently having a mind of its own, you will find your boxer entertain itself by digging the ground often, chewing, and licking the mouth to beat boredom.

They are also very stubborn in character which makes them a terrible choice for first-timers with dogs, they are generally a bit difficult with adult dogs including dogs of a similar breed but friendly with puppies. They usually do not bark unless there is a genuine reason behind it but they love to growl.

If you have occupied home with people around all the time or you want a canine buddy the whole time, then a boxer is just the perfect breed to get. Being a highly active dog, they dread loneliness and they can cope finely in both a house and an apartment as long as you provide it with enough room and spaces for exercises and activities.

What you must have is a large yard if you are living in a house for it to dig the ground and run around as it likes. And more so, if you are given to being away from home most of the time, getting a boxer may not be the best for you and the dog, because they usually get aggressive when left alone.

They also are not very fond of the humid temperatures, so great care should be given it during hot weather so that they don’t get overheated and the same care during the cold seasons because of their thin fur coat. Boxers are known as loud snorers and they drool greatly too.

Boxers are playful and very energetic dogs as such regular exercises are part of a good canine relationship, especially a breed of this sort. So a daily jogging companion your boxer should be to you and always on a leash, so it doesn’t get overly energetic to the drear of fellow pedestrians.

Your boxer should be allowed to play in a fenced area and on-leashed since it is likely to jump and leap around in excitement. This puts a boxer as a bad choice for a frail owner as they may find it a tad impossible and daunting keeping up with its excessive activity demands.

Being a breed with a short and thin coat its grooming demands are quite easy and little, all it needs is a light brushing of the hair twice every week to maintain its good and gleeful looks.

Bathing should be a once in a while since boxers are generally clean dogs and its nails, be trimmed once every month or as often as they grow worn on surfaces, its teeth should also be brushed daily to avoid tartar formation and other dental crises.

The unregulated breeders who are selling outside of the USDA regulations and without a license are what we consider to be “Puppy Mills.” We are committed to offering Boxer puppies who will grow up to become important members of your family. We only purchase puppies from the very best sources, and we stand behind every puppy we sell.

Boxer's who found a loving home