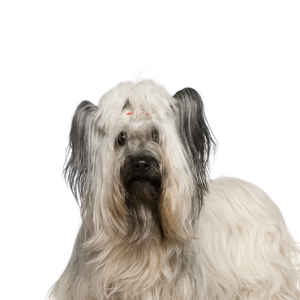 The dog of the isle is a loyal watchdog. On the day Queen Mary of Scots was to be executed, her loyal Skye terrier was present. Queen Victoria also made the breed popular but Vera Shaw’s 1881 “The Illustrated Book of the Dog” greatly increased its popularity. The world-famous Grey Friars Bobby also sealed the loyalty of the breed. In 2005 however, the breed produced in its home country the United Kingdom were only 30. The Skye terrier has now become one of today’s endangered species. Discover more about our Skye Terrier puppies for sale below!

Over 400 years ago the Skye Terrier was found on the Isle of Skye, which happens to be one of the largest Islands located in the Inner Hebrides of Scotland. Since the time of its discovery, the breed has remained almost unchanged. The sturdy short legs created to dig, the thick double coat that serves as a protective shield from rivals, bites, thorns, and rough brushes all remain the same with just a few slight changes. In the past, the worker dogs bred by farmers were to be used in hunting and chasing vermin.

The Skye Terriers origination is said to have started from a Spanish shipwreck that occurred near the island. Maltese dogs were said to have been among the survivors of that wreck and thus farmers began to mate the Maltese with their local terriers. When the mid-1800s rolled in, Queen Victoria had found strong affection for the breed resulting in its entire domestication by rich nobles and aristocrats.

The queen’s fondness for the breed might have built a new foundation of popularity for this companion dog, however in 1858, a dog named Bobby who lost his master and sat at his grave for 14 years before passing on went on to become legendary thanks to his unmatched level of loyalty and dedication.

The fearless and self-assured Skye Terrier has a mind of its own. Like many terriers, the dog is active and always ready for a chase, it doesn’t matter the size of the animal. To get the Skye terrier to behave, you would need a trainer with a strong voice and a consistent attitude. Crucial to the success of the training is the need for a positive-technique that rewards the Terrier with play and food.

Just like many companion breeds, the Skye terrier loves to be around family and can be extremely loyal and good-natured. He is usually reserved towards strangers this is one of the reasons why he makes such a superb watchdog.

Skye Terriers can adapt, what is needed is continuous re-affirmed training techniques. The dog is one that fits easily into any environment so it doesn’t quite matter what type of place it finds itself, be it indoor, outdoor or the countryside, however, some precautions need to be taken especially if your home is outdoorsy. Just like many Terriers, the Skye Terrier loves a good chase and so to prevent him from chasing and running after people or other animals a fenced yard is of the essence.

Although built to chase, the energy level of the Skye terrier compared to some other terriers is average. The terrier is a great companion and indoor dog that requires as little as 30 minutes of exercise a day. When outside there would be a need for some mental workouts like basic obedience exercise. For 8-10 months Skye’s, exercising, jumping and chasing would ruin its bone growth, which would cause him severe pain and lead to a badly bowed leg.

Rule number one, do not allow the coat to get matted, this means having to properly brush the coat once or twice every week. With a coat as thick as his, the terrier is still considered an average shedder. Attention should also be given to areas around the mouth and eyes, this would require more frequent cleaning. Then there is the need to avoid tartar buildup by brushing daily.

The unregulated breeders who are selling outside of the USDA regulations and without a license are what we consider to be “Puppy Mills.” We are committed to offering Skye Terrier puppies who will grow up to become important members of your family. We only purchase puppies from the very best sources, and we stand behind every puppy we sell.

Yes, this is mostly if they are bored and are left alone for a long period.

The Skye terrier’s moderate activity level has nothing on him in terms of how it loves to chase and kill smaller pets. He can also be aggressive towards other animals.

The best place would be from a breeder who is reputable and can provide guarantees and health clearance. Petland offers all of that plus more! Contact us today to learn more about the availability of this breed.

Skye Terriers enjoy outdoor activities, but they are usually quiet when inside which makes them perfect for small apartments, and they enjoy living indoors as well.

There are 6 colors; cream, black, grey, fawn, silver, and blue.

Females Skye terriers can usually weigh between 25-30 pounds while the males are between 35-40 pounds.

The quality of the dog food matters as it needs 13/8 to 17/8 cups daily. This should be divided into two high-quality meals.

The Skye terrier is typically a healthy breed when gotten from a licensed breeder. However, for baby terriers, excessive jumping can cause Achondroplastic, an orthopedic problem caused by its large body on small legs.

The Skye terrier has a mind of his own, although very sensitive. It is typically curious when it encounters strangers but is fiercely loyal and good-natured to his own family.

Skye Terrier is an excellent companion for older children. However, you must teach children to approach the dog, this is to prevent biting and pulling from either the dog or child.