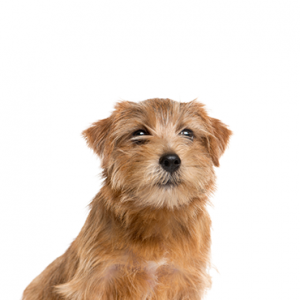 The Norfolk Terrier was developed in the year 1880 by British sportsmen. It was referred to as the Norwich Terrier until 1964 because both breeds had many similarities and were considered as the same. Norfolk Terriers are believed to have been made by crossing small red terriers with local terriers. Before the year 1936, Norfolk Terriers were given different names including; the Cantab Terrier, the Trumpington Terrier, and Jones Terriers.

In 1964, the Kennel Club named the droopy-eared dog breed the Norfolk Terrier, leaving the name Norwich Terrier to the sharp-eared breed. Since then, both dog breeds have gain distinct temperaments and looks, making it easier to distinguish both.

Norfolk terriers are fearless little dogs with an independent mind. In the terrier group of dogs, they are the most accommodating. They move in packs and easily socialize with other dogs. They make good pets as they enjoy being around humans.

They are lively, active and playful. Norfolk Terriers are not very vocal dogs. Most of the time, they stay quiet and bark when there is a reason to be vocal. They are also natural hunters with low tolerance of vermin. Norfolk Terriers should be kept indoors.

The Norfolk Terrier loves human contact hence it should be kept indoors. Being around people makes them happy because they are lively dogs that thrive on attention and affection. Though they need some time outdoors to play and run around, living outdoors would be bad for them.

They are small, quiet dogs that do not occupy much space in the house. They can also be tidy when trained properly. Keeping them indoors will not be inconvenient.

Norfolk Terriers need at least one hour of exercise daily. During this one hour, it is necessary that they take long walks, run, play fetch or do farm work. They are intelligent dogs hence obedience exercise is also important to teach them to take instructions. Their independent nature and willful streak can make the training tough sometimes so daily training will be helpful.

Though Norfolk Terriers have a natural unkempt shaggy look, grooming is necessary. Their coats should be brushed at least once a week. Their toenails require regular trimming and their ears should be cleaned weekly.

Their teeth should also be brushed once a week with doggie toothpaste and a toothbrush. Bathing should be done once a month to avoid softening their exterior coat. Lastly, their coats should not be trimmed with a clipper but by stripping. This shortens and thins the coat perfectly.

The unregulated breeders who are selling outside of the USDA regulations and without a license are what we consider to be “Puppy Mills.” We are committed to offering Norfolk Terrier puppies who will grow up to become important members of your family. We only purchase puppies from the very best sources, and we stand behind every puppy we sell.

A Norfolk Terrier is great with children. For homes with children younger than the age of ten, it is important to keep an eye out for the dogs because they are small and can easily be stepped on or injured. Generally, Norfolk Terriers are affectionate towards kids.

Norfolk Terriers are good-natured hence can live peacefully with other dogs. However, they do not live well with small animals such as hamsters or birds. They perceive smaller animals as prey.

Despite their small size, Norfolk Terriers are very active and lively. They are good-natured and always in the mood to play. Without action, they become unhappy and bored.

A Norfolk Terrier can be black, red, wheaten, grizzle or brown. It has a wire-haired coat and drooping ears.

The life expectancy of a Norfolk Terrier is 8 to 14 years. Some dogs of this breed can grow up to 17 years.

No. Norfolk Terriers are not yappy. They only bark when they are excited, bored or are suspicious.

Norfolk Terriers love digging. It is important to keep an eye on them when they’re outdoors to make sure they don’t leave the yard by digging holes under the fence.

Divide one cup of high-quality dog food into two. Feed them one half in the morning and the other half in the evening. Avoid overfeeding them. They tend to become obese if they are overfed with little or no exercise.

They have an Independent nature hence it takes patience and consistency to train a Norfolk Terrier.